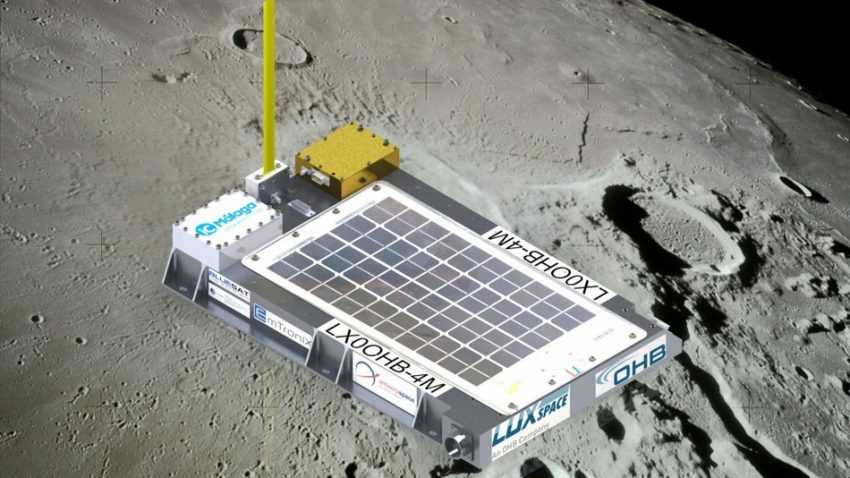 The first privately funded mission to the moon is scheduled to blast off Thursday, Oct. 23, hitching a ride on a Chinese Long March rocket.

The 4M mission, a project developed by Luxembourg-based company LuxSpace, will piggyback on a Chinese moon flyby unofficially dubbed Chang’e 5-T1, which aims to test out technology for a future lunar sample-return mission. Liftoff is set for 1:59 p.m. EDT from China’s Xichang Satellite Launch Center.

If all goes according to plan, the Chang’e 5-T1 spacecraft will zoom around the moon and back toward Earth, ultimately sending a test capsule barreling into our planet’s atmosphere on Oct. 31. The main purpose is to try out tech that could get moon dirt and rocks to Earth — the goal of China’s Chang’e 5 mission, currently slated to blast off in 2017.

The 31-pound 4M payload is attached to the Long March’s upper stage, which will also perform a close lunar flyby and return to Earth’s neighborhood. 4M will transmit signals continuously during its space journey, and LuxSpace hopes amateur radio operators around the world will listen in. Indeed, the company will offer prizes to people who participate.

The data collected by radio amateurs could also help demonstrate and develop a crowd-based approach to spacecraft tracking and navigation, Moser said. Further, 4M is equipped with a tiny dosimeter, provided by Spanish company iC-Málaga, which will record radiation levels during the mini-probe’s mission.

All of this will be done on the cheap.

“The costs for the entire mission are in the six figures,” Moser said.

4M is an homage to Manfred Fuchs, the founder of LuxSpace’s parent company OHB, who died in April at the age of 75. (4M stands for “Manfred Memorial Moon Mission.”)

While the Chang’e 5-T1 capsule will land back on Earth, 4M and the Long March upper stage will likely end up in a long, looping orbit around our planet, LuxSpace representatives said. 4M’s nominal mission life is about eight days, but the payload may keep operating for longer than that.

“The secondary power supply of 4M comprises solar cells and would extend the mission life to keep 4M operational in an orbital region where few spacecraft have been before,” Moser said. “Nevertheless, this secondary power supply (therefore, life of 4M) depends strongly on the attitude of the last stage of the launcher, i.e., the availability of sunlight.”

This article was originally published at Space.com here Written by Mike Wall.

Last Updated on September 29, 2017 by Moonipulations

This website uses cookies to improve your experience while you navigate through the website. Out of these, the cookies that are categorized as necessary are stored on your browser as they are essential for the working of basic functionalities of the website. We also use third-party cookies that help us analyze and understand how you use this website. These cookies will be stored in your browser only with your consent. You also have the option to opt-out of these cookies. But opting out of some of these cookies may affect your browsing experience.
Necessary Always Enabled

Any cookies that may not be particularly necessary for the website to function and is used specifically to collect user personal data via analytics, ads, other embedded contents are termed as non-necessary cookies. It is mandatory to procure user consent prior to running these cookies on your website.