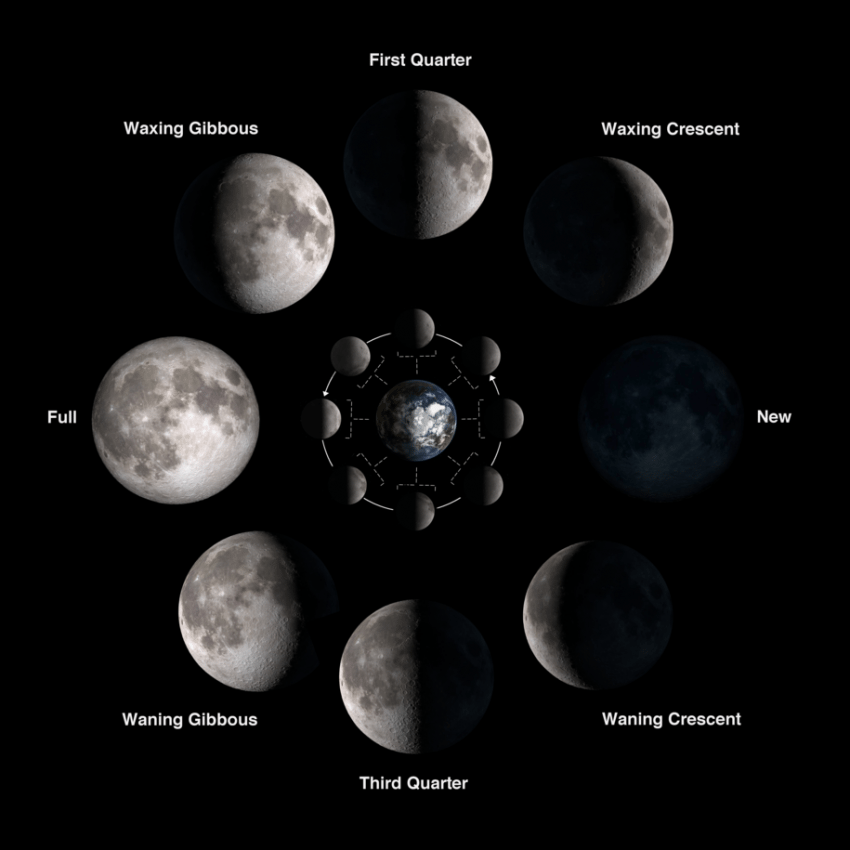 The Phases of the Moon

The moon has four phases or quarters lasting about seven days each. The first two quarters are during the waxing or increasing light, between the new and the full moon. The third and fourth quarters are after the full moon when the light is waning, or decreasing.

Planting by the moon is an idea as old as agriculture, based both in folklore and superstition, but there are scientific ideas to back it up. The Earth is in a large gravitational field, influenced by both the sun and moon. The tides are highest at the time of the new and the full moon, when sun and moon are lined up with earth. Just as the moon pulls the tides in the oceans, it also pulls upon the subtle bodies of water, causing moisture to rise in the earth, which encourages growth. The highest amount of moisture is in the soil at this time, and tests have proven that seeds will absorb the most water at the time of the full moon.

For more information about how lunar planting works, including research and references, check out this extensive resource: Gardening by the Moon.

NEW MOON
At the new moon, the lunar gravity pulls water up, and causes the seeds to swell and burst. This factor, coupled with the increasing moonlight creates balanced root and leaf growth. This is the best time for planting above ground annual crops that produce their seeds outside the fruit. Examples are lettuce, spinach, celery, broccoli, cabbage, cauliflower, and grain crops. Cucumbers like this phase also, even though they are an exception to that rule.

SECOND QUARTER
In the second quarter the gravitational pull is less, but the moonlight is strong, creating strong leaf growth. It is generally a good time for planting, especially two days before the full moon. The types of crops that prefer the second quarter are annuals that produce above ground, but their seeds form inside the fruit, such as beans, melons, peas, peppers, squash, and tomatoes. Mow lawns in the first or second quarter to increase growth.

FULL MOON
After the full moon, as the moon wanes, the energy is drawing down. The gravitation pull is high, creating more moisture in the soil, but the moonlight is decreasing, putting energy into the roots. This is a favorable time for planting root crops, including beets, carrots, onions, potatoes, and peanuts. It is also good for perennials, biennials, bulbs and transplanting because of the active root growth. Pruning is best done in the third quarter, in the sign of Scorpio.

FOURTH QUARTER
In the fourth quarter there is decreased gravitational pull and moonlight, and it is considered a resting period. This is also the best time to cultivate, harvest, transplant and prune. Mow lawns in the third or fourth quarter to retard growth.

Last Updated on March 18, 2016 by Moonipulations